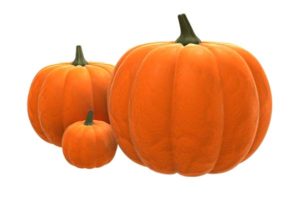 In honor of National Pumpkin Day, which took place on Wednesday the 26th and because at this time of the year, we all crave pumpkin  in almost everything we eat (or drink), we wanted to share a bit of the Great Pumpkin – Facts, Legends and Lore and even health tips in regards to the pumpkin.

To begin with….which is it?  FRUIT or VEGETABLE?   Because it has seeds, it is most definitely a fruit.   In fact, the average pumpkin contains about 1 cup of seeds.   The oldest evidence of pumpkin-related seeds dates back to somewhere between 7000 and 5500 BC to seeds found in Mexico.

Pumpkins are members of the cucurbit or gourd family.  In addition to pumpkins, this “family” consists of squash, cucumbers, luffas, watermelons and melons; the word “pumpkin” originates from the word pepon, which means “large melon” in Greek.

Well before the pilgrims arrived, the pumpkin had been a staple of Native American Indian diet.  Strips of dried pumpkin were woven into mats, additionally, the Indians would roast long strips of pumpkin over an open fire and eat them; seeds were preserved and were used for food as well as medicine.

Once the pilgrims arrived and saw the pumpkins grown by the Indians, they soon copied the Indians and pumpkins rapidly became a staple in their diets as well.  As we do today, the settlers would use pumpkin in a variety of recipes from soups to stews to desserts.

In fact, it is believed that the origin of pumpkin pie is thought to have occurred when the colonists sliced off the pumpkin top, removed the seeds, and then filled it with milk, spices and honey. The pumpkin was then baked in the hot ashes of a dying fire. 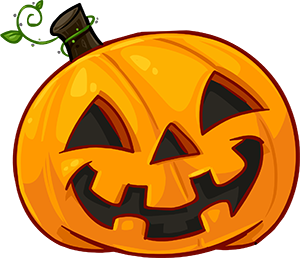 Even though Halloween didn’t get a foothold in America until the late 1800’s, it originally dates back about 3000 years to the Celtic festival of Samhain (pronounced “sow-ain”).  The celebration started at sundown on October 31st and lasted until sundown on November 1st.   During the festival glowing jack-o-lanterns, carved from turnips or gourds, were set on porches and in windows to not only welcome deceased loved ones but to also act as protection against evil spirits.   Burning lumps of coal were used to light the inside of the jack-o-lanterns, only to be replaced by candles as the years passed.

“Samhain” means “Summer’s End”.  It was believed that the souls of the dead were closest to this world and was the best time to contact them to say good bye or ask for assistance. Additionally, it was a celebration of the end of the harvest season and is celebrated and treated as such today by those who practice Wicca or other nature-based religions.

Your Health and Pumpkins

In our above “Did You Know” section, we mentioned that pumpkins contain Vitamin A and potassium.  The truth is that pumpkins are RICH in both of these; they are also high in fiber and should be a part of your diet….(as long as you don’t add all the other ingredients that make up many of the pumpkin recipes.)

Here are just a few of the reasons to add pumpkin to your diet: The Color Orange and Pumpkins

Ever wonder why pumpkins are orange, instead of red, or yellow or even green?  We have the answer for you…..Pumpkins contain a pigment called “Carotenoids.  During their growth state, pumpkins are green, due to the presence of chlorophyll which is needed for the plants’ photosynthesis.

During the late summer, nature sends a signal to the green pumpkin to ripen; as a result, the green pumpkin produces less and less chlorophyll, which then lets the orange color of the carotenoid begin to emerge.  The end result? An orange pumpkin!

on the farm, pumpkin, pumpkin picking
About Post Author