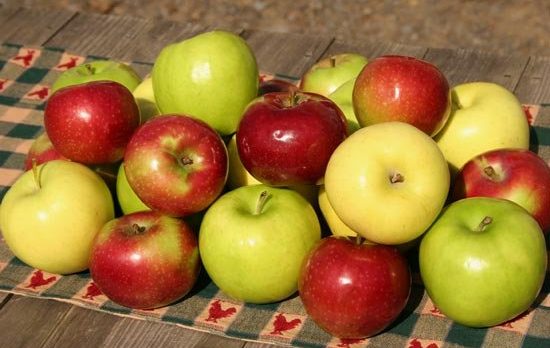 What happens when you cross a Red Delicious apple and a McIntosh apple?  An Empire apple!  Developed in New York in 1966, Empire apples have a red and green exterior with white markings.  The sweet-tart taste brings the best flavors of Red Delicious and McIntosh together.  The crunchy texture makes it popular choice for pies.  Additionally, Empires are great in salads, sauce, baking and freezing. Widely grown and very popular, Fuji apples originated in Japan.  A cross between Red Delicious and Ralls Janet apples, Fuji apples were developed in the 1930’s and were made available in the US in the 1960’s. The word Fuji means ‘wealthy’ or ‘abundant’ in Japan.

Fuji’s are a large, heavy, firm apple.  They have a red exterior with some striping and yellow or green undertones.  Crisp and juicy, Fuji’s are one of the sweetest apple varieties available.  With a longer shelf life than most, Fuji apples are great for eating, baking, and making sauces.  They also pair well with cheese and are great in salads.

Come out to Apple Holler and pick some of these great apples!

Learn about Gala and McIntosh Apples

What you need to know about Pristine & Sansa Apples!

Apples, Empire, Fuji, Golden Delicious, Healthy Apples
You may also like
How We Grow Healthy Apples
Learn about Gala and McIntosh Apples
A new apple found after a hurricane?  Learn the history of Gingergold apples
Apple Holler’s Guide to Apple Picking
About Post Author